Personal menu
Back to all

Fertility patients in England being failed by unfair access to funding

When it comes to fertility treatment in the UK, and specifically IVF, there are two way of doing it: private or NHS funded treatment. When you add in the factor of where you live, how old you are, what sex your partner is and if you’ve had children in the past it becomes a whole other story.

Variation in NHS funding for fertility across the UK

NHS funding for IVF cycles varies considerably across the UK. Although the National Institute for Health and Clinical Excellence (NICE), state that the NHS should offer women under 40 three full cycles of IVF, if they have been trying for a child for more than two years, only 12%  of Clinical Commissioning Groups (CCGs) offer the recommended three IVF cycles to women under 40 in England.

This is due to the fact that each CCG (of which there are 207 in England) is able to make independent decisions on how much funding they dedicate to fertility treatments and IVF. This means they can set their own limit on the number of IVF cycles and their own criteria on who is eligible. As a result depending on where your GP is located you may be entitled to less or more IVF NHS funded IVF cycles.

But why do CCG’s limit fertility funding?

Sadly some CCG’s consider fertility a lower priority for their patients than others. The limited NHS funding available to CCG’s puts them in a position to have to reduce costs. Unfortunately, IVF funding is often the first to be cut.

What about other UK nations? And what are the stats?

In 2019 there was significantly more NHS-funded treatment of IVF cycles (62%) in Scotland compared to other UK nations: England 32%, Wales 39% and Norther Ireland 34% IVF cycles.

Although the NHS-funded cycles in Scotland has risen over the past five years NHS funding has declined in all other nations. Funded cycles in England have fallen from 40% to in 2014 to 32% in 2019.

Since all nations other than England have levels of funding set nationally England has the most considerable regional variation. In the last five years, three English regions have seen double digit declines.

Age of women significantly impacts the success rates of IVF treatment and so your age impacts the NHS funding available to you for fertility treatment. According to the hfea 2019 report, younger age groups who are more likely to achieve a successful pregnancy from treatment have been most affected by funding cuts in recent years. In 2019 48% of cycles for under 35s were NHS funded, which was down from 54%.  Similarly, there was a 5% decrease in the number of IVF cycles funded by the NHS among those aged 35-37. Meanwhile there has been little or no change from 2017 to 2019 for those aged 40+ where funding eligibility is already very low.

The new national audit data from Fertility Network UK revealed  that over two third of CCGs (69%) refuse to treat single women and over a quarter of CCGs (26.6%) deny access to same sax couples. This is usually based on the fact that NICE states funded treatment should be provided to individuals who have tried but failed to conceive. Therefore treatment is withheld from single women and same sex couples until they have proved their infertility by paying privately for six or 12 rounds of intrauterine insemination (IUI).

Other criteria for IVF eligibility

Although a big factor the location of your GP is not the only factor that impacts your access to IVF funding. Even if NHS funding is available in your are you must be eligible and unfortunately not everyone is. The table below, from the Fertility Partnership, shows criteria of which some or all have to be met to be able to receive NHS funded IVF. 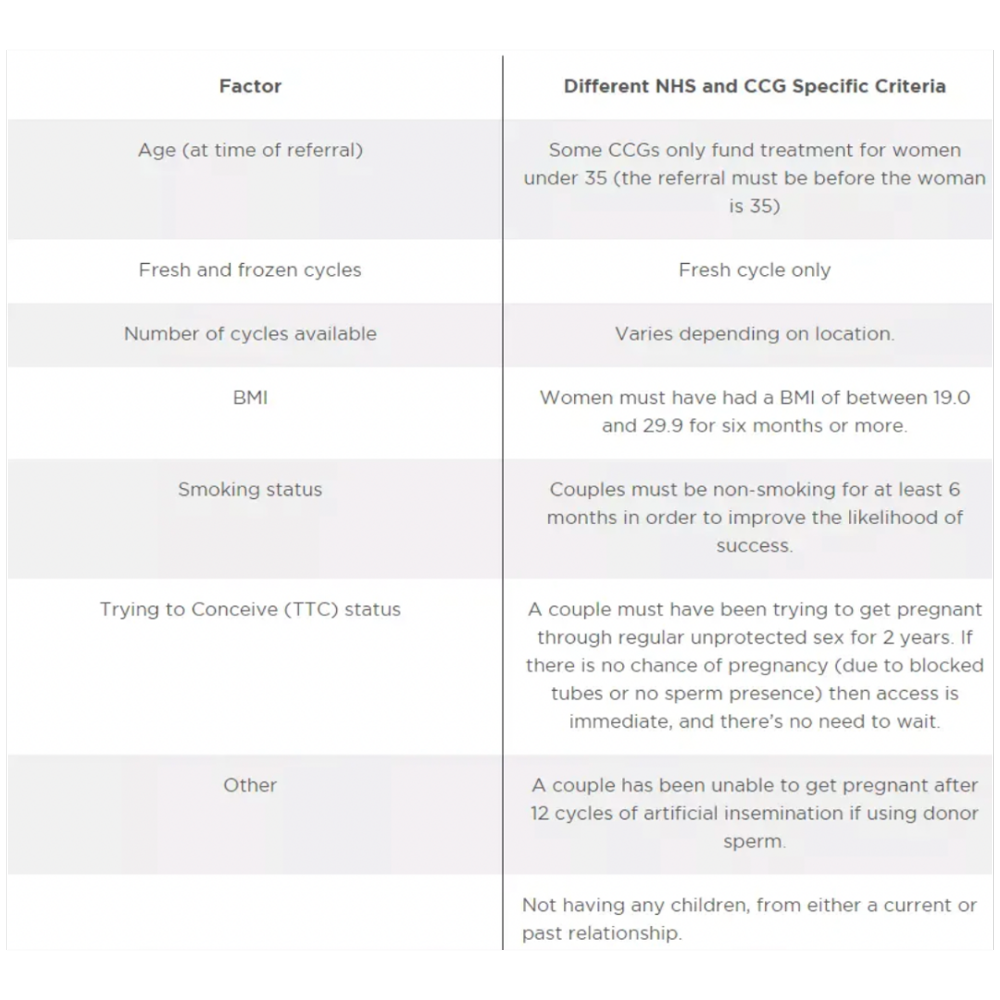